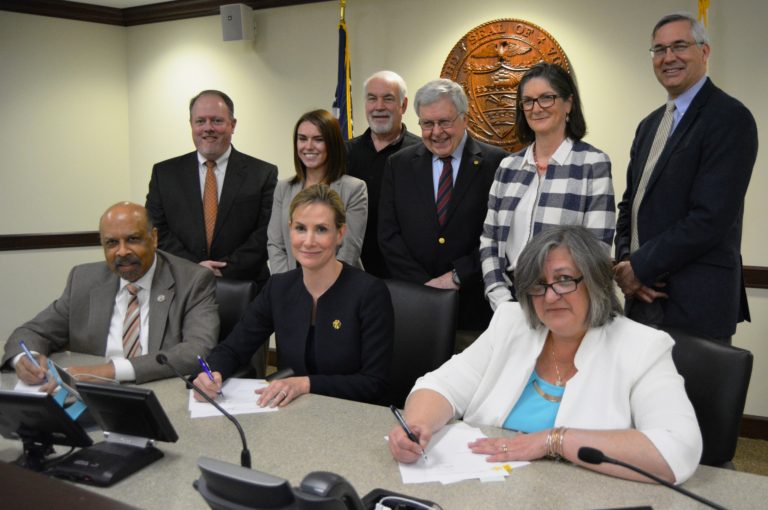 Our friends at the Bicycle Coalition of Greater Philadelphia have taken to the road over the past few months to encourage municipalities across the Delaware Valley to sign a resolution that shows their support for increased construction of the Circuit Trails. By adding more signatures to the resolution, the Coalition will be able to show funders how much communities care about expanding the trail networks in their areas. Below is the Bicycle Coalition’s resolution update, which recently appeared on its blog!

In an April blog post, we reported that the Circuit Coalition’s initiative to garner support for constructing 500 miles by 2025 was “gathering steam,” with 20+ municipalities on board. At that time, we were also pursuing counties to get them to sign the resolution, but had yet to get one on board.

A few months later and we’re happy to report that our steam is reaching quite a high pressure: We now have 36 municipalities who have signed the resolution, and three counties: Montgomery, Chester, and Camden! Additionally, there are another 54 municipalities who are in the process of considering legislation.

At this point, it would be too cumbersome to list every municipality that has signed on, or is considering doing so. “Well how do I find out if my municipality has signed on?” you may ask. Check out this interactive map, a screenshot of which can be seen below. Notable is that we now have at least one resolution passed in seven counties. Our previous count was four.

Passed municipalities are in blue, pending are in yellow. Passed counties are a shade between yellow and grey. Trails are in red (planned), green (in progress), and black (complete).

Why are we attempting to get this resolution passed in as many municipalities as possible? We want to show state, federal, and non-profit foundation decision makers that our region overwhelmingly supports increased construction of The Circuit.

For those of you who want to show your individual support, we encourage you to sign this petition. If you don’t see your town in blue in the map and want to get involved, please reach out to our Regional Planner Leonard Bonarek: Leonard@bicyclecoalition.org. You don’t need to be a power broker! Many resolutions have been passed after being brought to council’s attention by ordinary citizens.

We’d also like to take a moment to recognize our tireless volunteer Amanda Lozinak, who is the Chair of our affiliate group Bike Chester County. Amanda (seen in the picture atop this blog, top row, second from the left) is responsible for many of the signed and pending municipalities in her area.