6 Down, 3 to go: Circuit Resolution Adopted in Philly

We love celebrating accomplishments, and this week, a major milestone was achieved – so allow us shout it from the rooftops. On Tuesday, we gathered with Circuit Trails supportors and coalition members alongside Philadelphia City Councilmembers Derek Green and Mark Squilla to celebrate Philadelphia County’s adoption of the Circuit Trails 500 Mile Resolution.  This is a major win – it means that 6 of the 9 Circuit Trails counties have now adopted the resolution, and in total, 4.8 million people in our region are represented by a government that supports the growth of the Circuit Trails network.

Our friends at the Bicycle Coalition posted a recap of Tuesday, and what it means for our continued efforts to reach 500 miles of trails by 2025 – read on below. 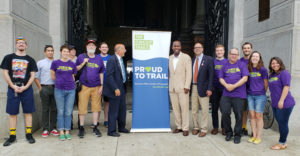 Philadelphia City Council recently adopted a resolution in support of building 500 miles of Circuit Trails by 2025. On Tuesday, Councilmembers Derek Green and Mark Squilla came to meet Circuit advocates outside City Hall to commemorate the occasion.

The resolution calls for speeding up our region’s rate of trail construction in order to get us back on schedule to have 750 miles constructed by 2040, as called for in the DVRPC’s long-range plan.

Philadelphia simultaneously becomes the sixth county and 80th municipality in our region to adopt such a resolution. As of today, we have all five counties in Pennsylvania on board, as well as Camden County in New Jersey. Next up: Gloucester, Mercer and Burlington Counties.

Click here for a link to our map that tracks resolution progress across the region. 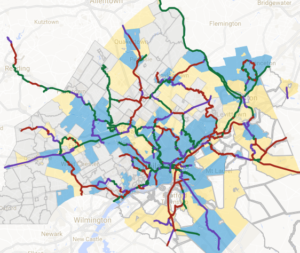 Our goals of reaching 100 municipal and nine county resolutions by year’s end are both well in sight.

This blog was written by and originally appeared on the Bicycle Coalition of Greater Philadelphia’s blog. View the original post.