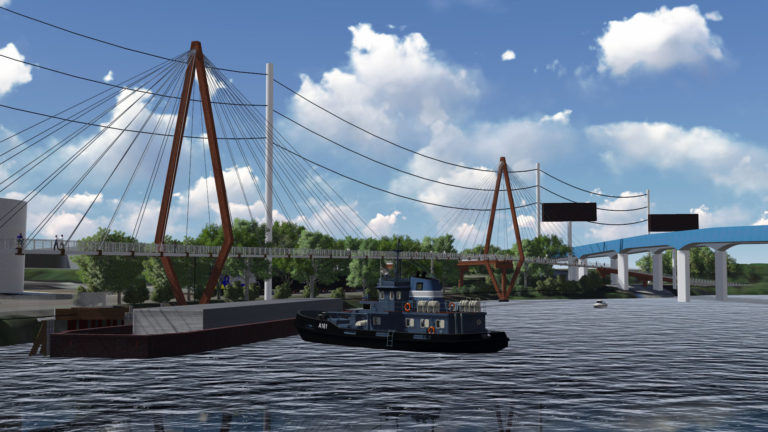 Circuit enthusiasts – we have HUGE news. The United States Department of Transportation recently awarded the City of Philadelphia with a $12M grant to close a major gap in the Schuylkill River Trail! When it’s completed, the now-funded Christian to Crescent Connector – located just south of the newly opened South to Christian segment – will connect to Gray’s Ferry Crescent Trail, and ultimately lead directly into Southwest Philadelphia. Closing this gap will make a connection between Delaware County, Southwest Philadelphia, Center City, Northwest Philadelphia and Montgomery County.

For more on this announcement, check out the Bicycle Coalition’s full blog below!

Rendering of the Christian to Crescent Connector, looking south

Yesterday, Senators Bob Casey and Pat Toomey announced that the Trump Administration had approved a $12 Million TIGER grant for the Christian to Crescent Connector.

This bridge-like structure that will hug the eastern side of the Schuylkill River and connect the Schuylkill Banks trail that currently ends in the vicinity of Christian Street all the way to the Gray’s Ferry Crescent trail and park.

A hearty congrats to the City of Philadelphia’s Office of Transportation & Infrastructure Systems (oTIS) and Schuylkill River Development Corporation for submitting a winning proposal!

The Circuit blossomed out of the first TIGER grant the region received in 2010 to build the Schuylkill Banks Boardwalk, Connector Bridge and nine other trail projects in Philadelphia and Camden.  A second grant was received for the Gray’s Ferry Swing Bridge in 2015.

Creating a bicycle-pedestrian high quality trail between Bartram’s Garden, the Philadelphia Museum of Art and Valley Forge will set Greater Philadelphia apart as having a world class green transportation and recreation network.  The goal of reaching 500 miles of Circuit Trails by 2025 just got one step closer.