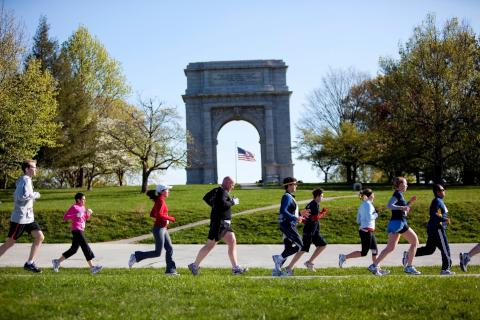 The 5-mile run, presented by the Valley Forge Tourism & Convention Board, follows the Schuylkill River Trail as it weaves through Valley Forge National Historical Park #onthecircuit. The course will challenge your stamina and showcase our region’s unique history as you tour the rolling hills and the historical gems that mark the site of General George Washington’s 1777-78 winter encampment.

The scenic course steps off at 8:30 a.m. from the Muhlenberg Brigade, where General Peter Muhlenberg anchored the outer line of defense in preparation of a potential British attack. Runners also pass monuments of Revolutionary War notables such as General Anthony Wayne, Baron von Steuben and the Patriots of African Descent, as well as cannons, log cabins and the National Memorial Arch, which commemorates the service and sacrifice of the men and women of the Valley Forge encampment.

This is the perfect run to gather the family (including the dog) and set out to conquer the valley. To learn more, visit our events page here.